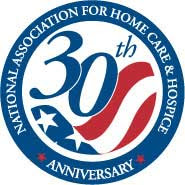 At the opening general session of the 2011 NAHC annual convention in Las Vegas, Val Halamandaris and his team of staff and volunteer leaders gave us an update on what's happening in Washington that will affect home health care, hospice, and private duty home care.

The conversation focused on the debt reduction process, and the impact of cuts in Medicare reimbursement to fund the Patient Protection and Accountable Care Act (Health Care Reform).

The three big issues are:

1. The activities of the Super Committee, and the potential for more cuts to Medicare.

Washington's last-minute deal to raise the U.S. debt limit in August also created a powerful "super committee" of 12 legislators charged with finding $1.5 trillion in deficit reductions by this fall. If they fail, automatic across-the-board spending cuts kick in.

2. Co-pays for home health and hospice

o Newly signed-up beneficiaries would pay a penalty if they also purchase private insurance that covers all or most of Medicare's copayments and deductibles. Administration officials say such insurance encourages over-treatment.

o New beneficiaries would pay a higher annual deductible for outpatient services. The so-called Part B deductible, currently $162, is indexed for inflation. It would go up by $25 for new enrollees in 2017, 2019 and 2021.

According to Mark Heaney, CEO of Addus Health Care, and chair of NAHC's National Council on Medicaid Home Care, we are looking at "techtonic shifts" in state Medicaid programs around the country.

The Accountable Care Act places much more responsibility on the state Medicaid programs to provide health care coverage for the uninsured, and provides for significant expansion beginning in 2014. According to Heaney, "45% of long term care spending is Medicaid Home Care."

Other topics covered by the panel included:

At this time of huge legislative and regulatory change that affects home health and hospice, leaders need to be aware of these changes. One of the best ways is to be actively involved in your state or national home care and hospice association.

What do you think?