I'm writing to you today from the Russell Senate Office Building in Washington DC where the National Association for Home Care and Hospice has gathered for their March on Washington and Private Duty Home Care Association meeting.  We just heard eight US Senators speak to the group, and each one of them described their own experience with home care or hospice with a family member or constituent, and their support for the services we provide.

Today, we heard from: 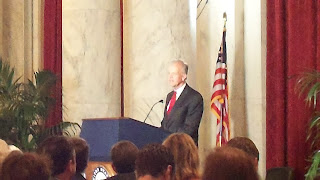 Each one of them thanked us for what we do in caring for patients and saving money for the government.

And yet, as Senator Pat Roberts from Kansas said, "And how do we thank you?  With cuts in Medicare reimbursement."  Go figure. 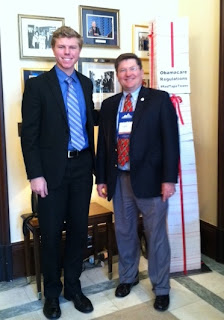 After our opportunity to hear from these Senators, I went down the hall to the office of the senior Senator from Kentucky, Senate Majority Leader Mitch McConnell.  While I was not able to meet with the Senator, I spent some significant time with my friend, Karl Magnuson, who is an intern in the Senator's office.  Karl talked with me about the workings of the office and his role in preparing daily press briefings for the senator and his staff.  Then we had lunch in the small take out grill in the underbelly of the US Capitol, and Karl showed me some of his own secret spots as we toured the Capitol building.

In a bit of serendipity, we also bumped into Kentucky Senator Rand Paul on the tram that runs under ground from the Russell Senate Office Building over to the Capitol.  We had an opportunity to listen in as Senator Paul talked with some constituents about immigration reform.

Posted by Stephen Tweed at 8:27 PM